this 1997 version was more based on the Empire Strikes Back 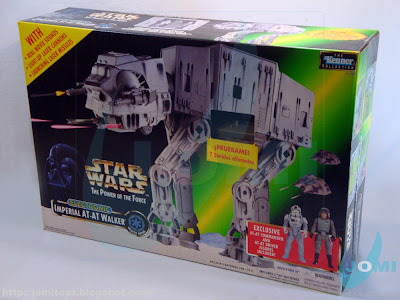 Including AT AT Commander and AT AT Driver figures (one of my personal favorites) this stands as one of the biggest toys and most cherished vehicles for Star Wars collectors. And considering it uses the vintage hull, it´s quite a deed. 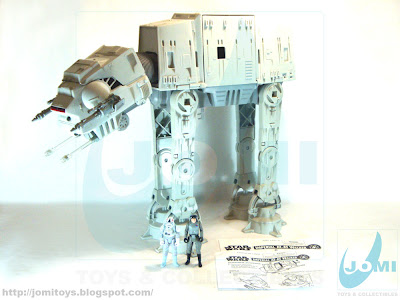 As you can see, it is a huge thing. And kicks ass too! For a lot more information and details on this wonderful toy, visit Rebel Scum 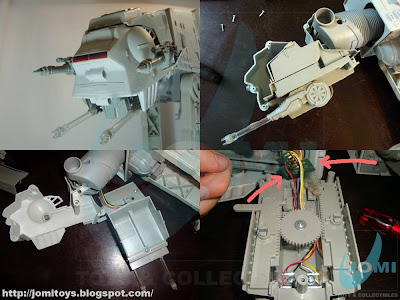 A common problem in these Hasbro/Kenner Electronic AT ATs was the printed circuit board controlling the front laser cannons and their peculiar sound. This is a great feature, so you really don´t want to miss that. And believe me, sooner or later, your AT AT will start to fade out even if you never open in for 20 years. Problem is... rust. Metal/iron oxidation. The way the cannons activate is shown above. In the actual same image where you can see where to focus your attention. When the cannon is pulled back, it clicks a metal shield which connecting 3 points in the printed circuit, activate the sound and light. When one catches rust, it won´t work. And it may get to a point where it may never work again in case you don´t live in an absolutely dry environment. 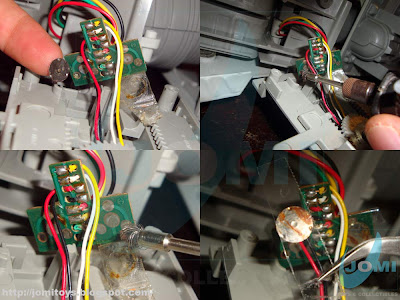 It´s fairly simple, but you need steady hands, a clamp and a small model rotary tool to more efficiently remove the problem. And for a long time. We all hope. After you´re done, be sure to connect the 3 points in the shield (shown above) to the correspondent place in the circuit. And stick it tight. While you´re at it, try it and hopefully you´ll hear the strong blaster sound and the red glow :) 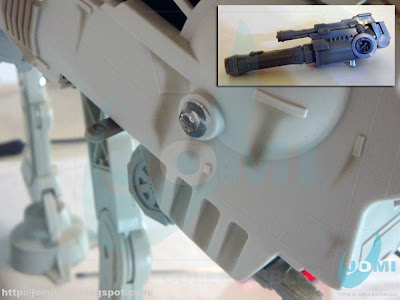 This AT AT walker in particular, was a very expected item. And an unfortunate episode at the same time. My favorite Imperial machine and for a LONG time I awaited the announced release of a POTF2 version. Ended up going to Spain to get one and although with the original US$80 price (or the equivalent in pesetas back in 1998) spent seem a small amount for such a wanted prize. It would take me longer than a year to have the guts to open it. Only to find out this was already been open previously. The stickers were applied, the chin gun stopped working in a couple of months (but like explained above, it was fixed) but the saddest detail was a broken right cannon (pictured above). You can only imagine the frustration. And since I was now in Portugal and the AT AT was completely sold out, there was nothing to do. But to embrace this vehicle in my collection and try to figure out what to do. A lot of solutions were possible but never used. Well, the years have gone by, and when our team gathered to decide what to do about Star Wars , and the decision to trade them away was made, we all thought it was better to leave the decision about what t do with that cannon to the future owner... (cleaning a tear).