Finally in Europe, the Lockheed C-130 Hercules-inspired aircraft has landed! 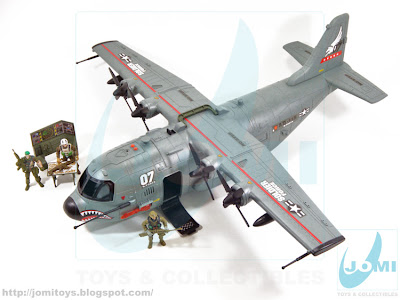 The most acclaimed release of 2011 (so far) from TRU True Heroes line, features a whole deal of space, weapons and transport abilities of one of the most well-known aircrafts in modern history. 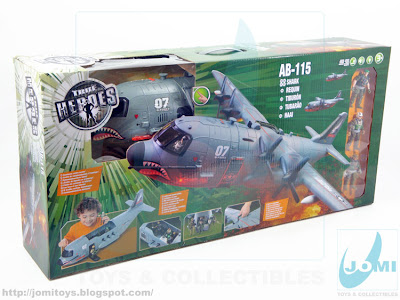 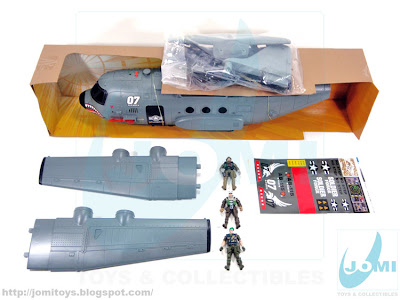 Before anything, the fact it comes and parts and with a lanel sheet is one of the greatest aspects of this vehicle/playset. After the more articulated Chap Mei figures, now this. Maybe the next step will be blueprints for the vehicles and filecards for the figures? We´ll be here waiting to see... 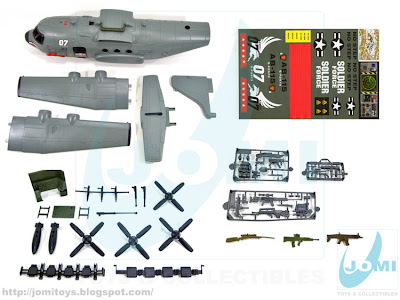 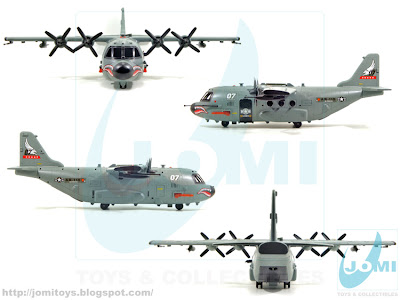 AB-115 Shark. A four-engine transport. Heavily based on the Hercules, this aircraft comes to fill a gap for both CM and G.I.Joe collectors.Good size, neutral color and balanced weight (and it weights a lot!). 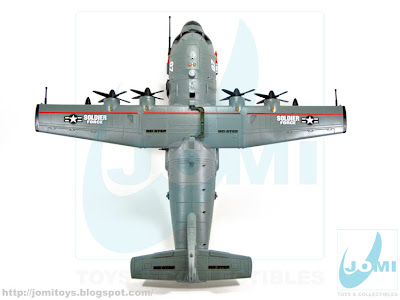 The top view is as impressive as all the others. Casts a huge shadow over the battle lines. 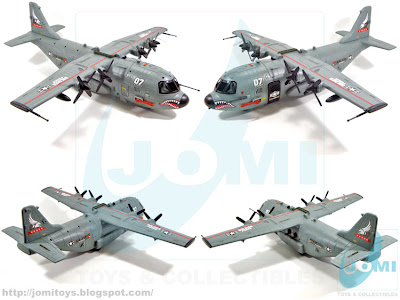 While not surpassing the famous Osprey, it´s probably the next best thing. 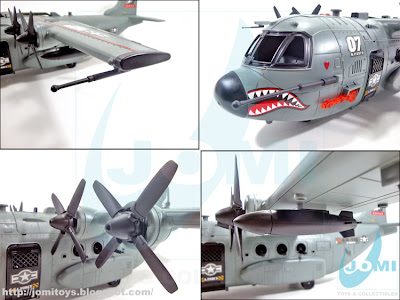 The details are awesome, you get from fuel tanks/bombs to antennas and probe, hatches and doors. 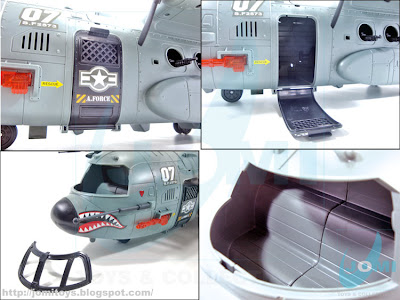 Opening side door and removable cockpit window (reveals a basic - very basic - cockpit with no instruments). 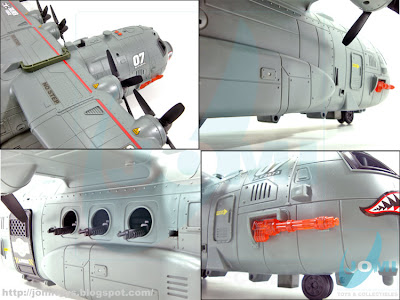 Great angles for such a beast. CM could easily go another way and make this more simple. And although it could have had a couple more interesting details, one cannot stress about what was done. It´s a solid toy with serious collector and customizing value. Reminds me of the day I first saw the Wild Quest transport helicopter. 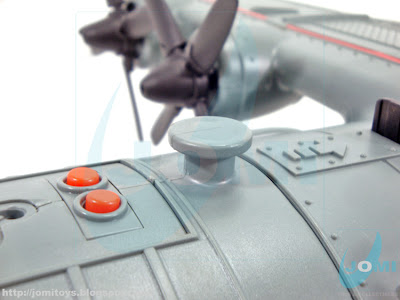 And of course, it comes with a SFX feature (and a mysterious knob behind the buttons which seems a little bit more than a scanner/radar emplacement). The sounds are excatlt the same used with the 2009 Devil Hunter. Also, and a good time to mention it, the wings come off to reveal the inside of the plane. Sculpted on top of the wing section is an arrow pointing back. Pushing the trigger back will release the section. 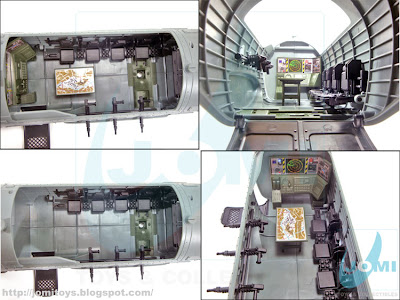 Getting a place to settle down the wing section can be tricky because it´s a huge wing span (86cm - almost 3 feet!). Inside is a world of fun. 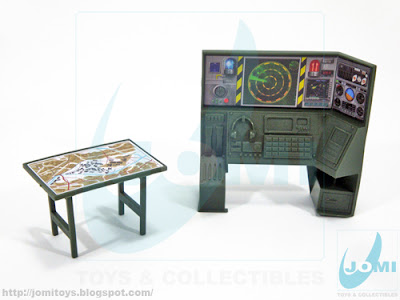 Radar station and table are loose to be removed (or put in). A great idea, since it can be used in or out the airplane. 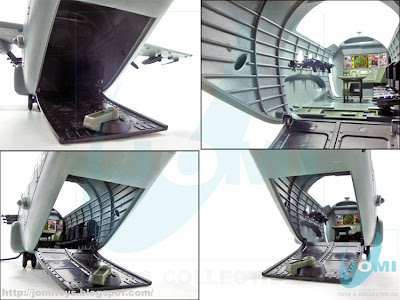 Troop and cargo "hydraulically-operated" main loading ramp. Opens the same way all CM big transports do. Turn the handle and it´s loose. Simple and functional. It´s not a huge door, nor is this "C-130" capable of transporting medium-sized vehicles. But as a paratroopers transport, it is perfect. 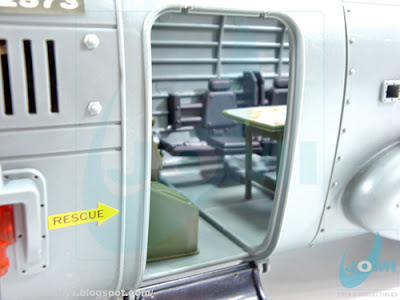 The side door is always a cool detail. Most of the action can happen through there! 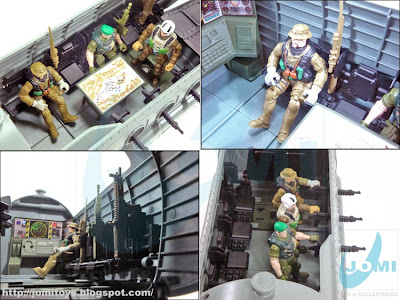 The aicraft "seats" 4 action figures inside the cargo area. The seats also include weapons stands in a rack-style but individually placed. A great detail! Has 3 battle stations spectre-style. 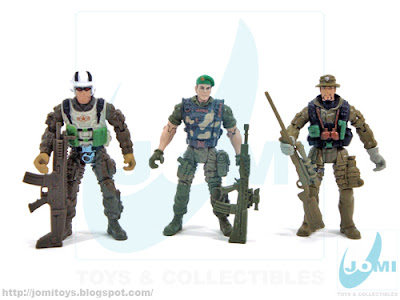 
Since we already had the opportunityto review the other 2, Sergeant Sharpblade will be the only one in charge of the figure presentation for the day. 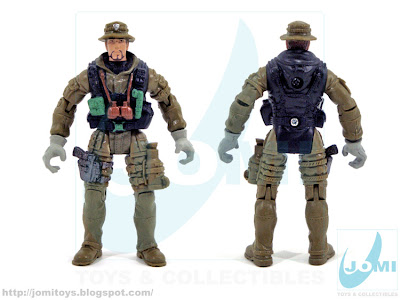 Figure: Sergeant Sharpblade. A Soldier Force series 7 figure, here in a True Heroes release. These figures are getting better by the year. Featuring a lot more articulation and the always present nice CM detail. such as the facial hair. Nice!

Be sure to look for available original Chap Mei figures, vehicles and accessories at CM Surplus Fan Mark