The 80s had some of the greatest toys and concepts. A lot was being explored in every direction and a lot has been deemed unsuitable for today´s children/youngsters. These 9V engine boats were some of many examples. Still you get cool stuff like ECO RAFT W/ MAN

"Back in the day" kids knew better than to put working propellers in their mouths and so on and so forth. This present over protection takes away many - eventual - cool toys. Well, at least we have had the 80s and early 90s.

Now for our entry. Made in China by Yego Ind. Ltd, this 1992 toy was purchased in an era where 3 3/4" action figure items were starting to become scarce. 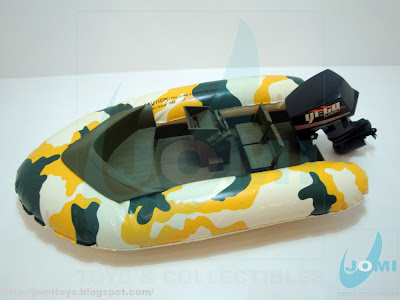 Fully assembled. This boat actually floats and moves around straight or in circles, depending on how you place the engine. 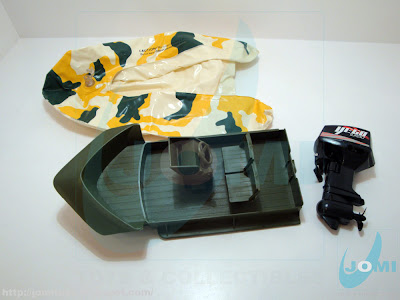 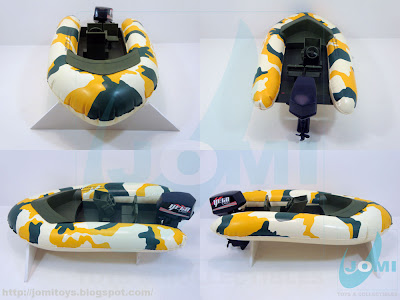 It sort of reminds me of the boats used in a lot of 80s war movies such as "Missing In Action". On the toy side of the thing, I used to own a couple of these real working engine boats when I was younger. I was about to say a kid, but I already reviewed hundreds of toys and own thousands, I guess that makes me a permanent child. While searching for similar concepts, I stumbled upon a great looking item I may purchase if the size is as good as the looks : R/C Cyborg Shark - Blue by Swimways 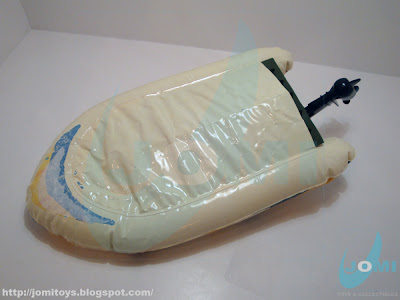 The floor may be near perfect for 1:18 scale figures, but the engine is far too big and the inflatable part are too uneven to use. But if you´re a custom "freak", it´s a challenge nonetheless. 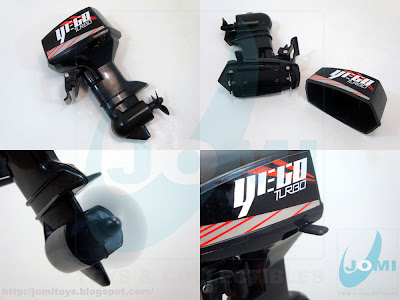 The 9V engine is powered by 2 AA batteries. On/Off switch and cool graphics. Very similar to the ones used by 12" G.I.Joe/ Action Man lines. 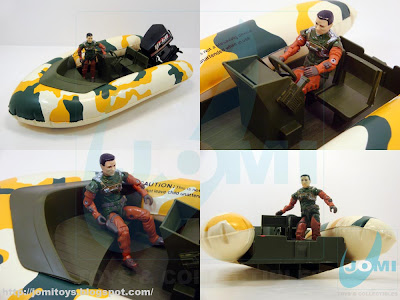 Scale shots with a RAH G.I.Joe figure. The boat´s floor is very interesting and not only in a possible custom point of view. It has wood looking sculpt and the seats are very nice. The overall look of it is very decent. 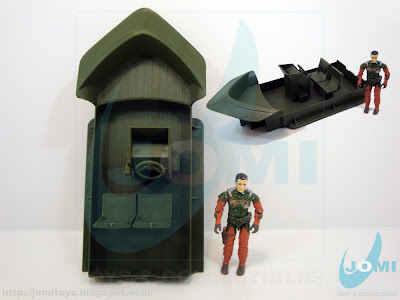 Removing the inflatable part, you can see how it looks proportional to 1:18 scale figures. And that... can only be a start. I´m sure we´ll present a customized variant in the future.