Another repaint from the same VI series, the Chap Mei´s version of Bell´s AH-1 Super Cobra attack helicopter, this vehicle has a lot of muscle. If it falls short of expectations, depends on how you look at it. European retail price in dollars: US$30 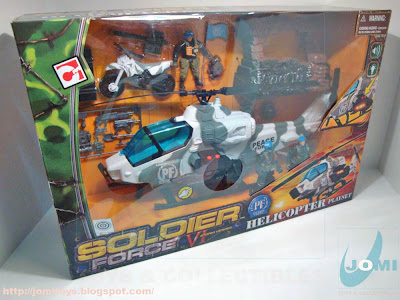 When compared to Lanard´s Attack Helicopter  this one has some plus and some minus. In the end, and after this review, it will be your own opinion which matters the most. 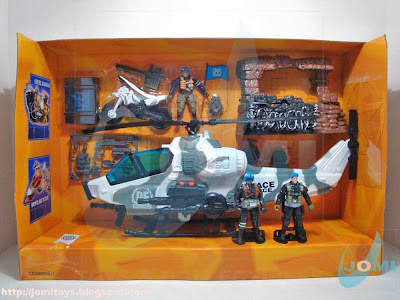 Fresh out of the box. Besides the helo, the first impression goes to the same old figures. But that´s a simple given fact. The same problem since last time this story was told, so we´ll leave it be. We have some nice looking new vehicles and that´s all there is to it! 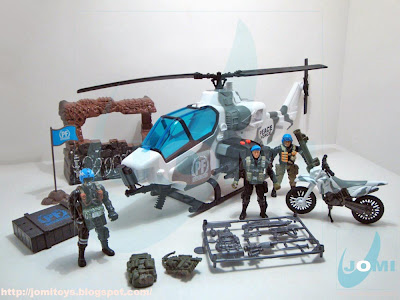 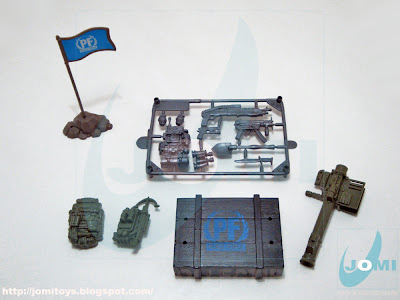 Hail to the return of the team´s flag. Nice looking though. Simple and clean logo/brand. The stinger missile launcher is always a shame to look at. Meaning too big for RAH 3 3/4" joes. The G.I.Joe VS Cobra and beyond series are a whole different matter. And for those, this launcher will do nicely. 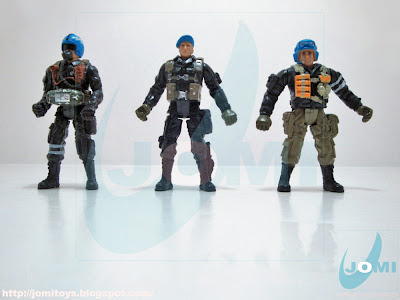 Same figures since Series III. And Series V variants as far as their heads go. They are now "Peace Keepers". 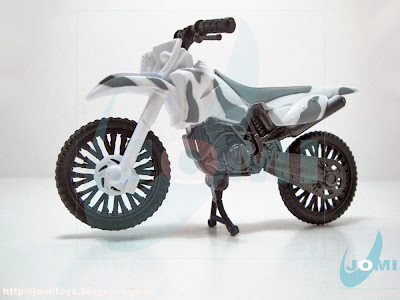 One of the best series VI new vehicles. Refer to "Soldier Force VI Peace Force Steel Badger" for more info on this bike. 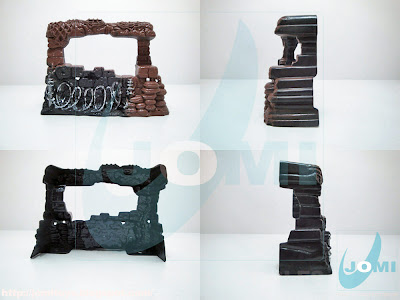 The bunker battle station. This was also a great novelty. In a way. Chap Mei always had the particular attention to "base detail". Series IV reviews on the Outposts can prove just that, but even from the very beginning, the Series I tower predicted some cool news in the future if the company should hold. Thankfully, it did. And today we get to have some diorama molds for a fair price. 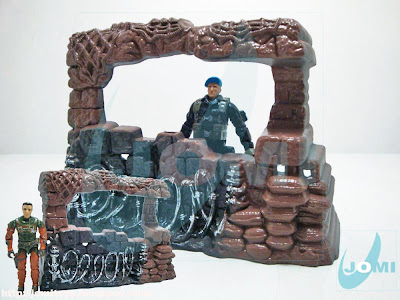 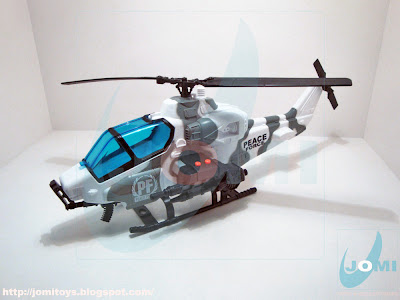 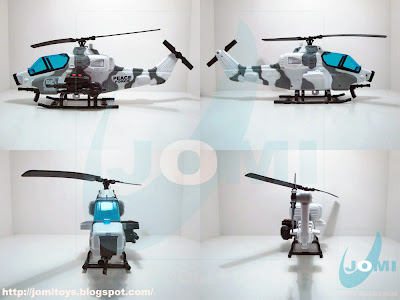 All 4 views come to show the similarity to the real twin-engine attack helicopter. Taking a wild guess, I believe Chap Mei asked Bell for the rights. Those who still remember the Hummer confusion between Lanard and General Motors/AM General know what I mean, those who don´t, refer to "The Corps! 1997 ATK Command Vehicle". 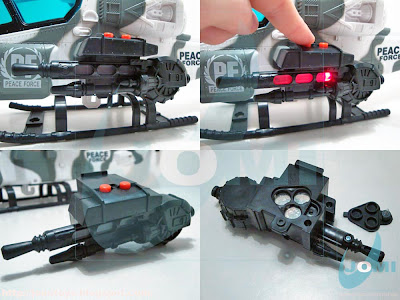 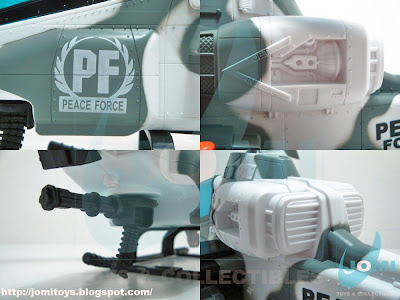 Some more details on this "bird". Give credit where credit is due, the "Peace Force" patch simply works. The more I look at it and these new paint schemes, the more I like them. Top right: Jet Intake letters sunken. Well, that sure saves on the decals... Overall good sculpting. 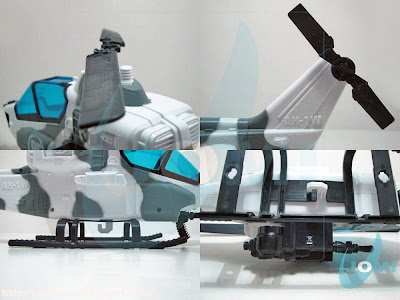 Yet more close-up shots. Note the main rotor blades angles. A nice detail. Speaking of detail, take a look at the printing on the tail: "AH-1W". A reference to a real Super Cobra model. And the belly hook. Not very common when it comes to attack helicopters, and definitely not present on the real helicopter, but... the action figures will find a use for it. 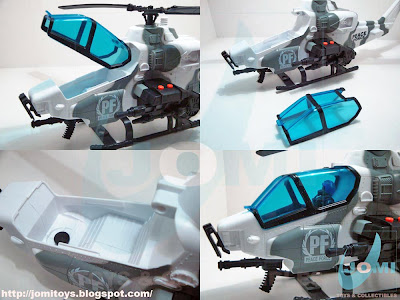 The cockpit. In the same line of detail (or lack there of) of Chap Mei´s latest air chariots. Besides that fact, once you get to an angle of 45º, the cockpit comes off its "moorings". Fits one Chap Mei pilot figure. 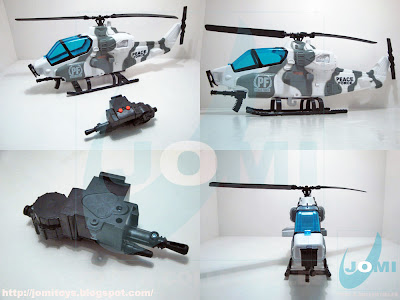 Shots without the bulky cannon. Some more "Super Cobra" feel to it. Yet still unbalanced. Too bad, since we´re talking about the "backbone" of the USMC helicopter force. And it´s too bad, because they were an inch away from a nearly perfect model. In a couple of years(ok, decades), the Super Cobra will be a memory, replaced by the AH-1Z Viper attack helicopter. 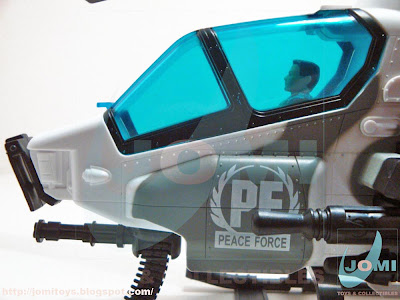 Considering they´re fitting one figure (that´s 1) in a Super Cobra (made for 2), there is a lot of room there to fit 2 with a little work. Concluding, this "Peace Force" Helicopter is a force to be reckon with. The plus highly overcomes the minus. 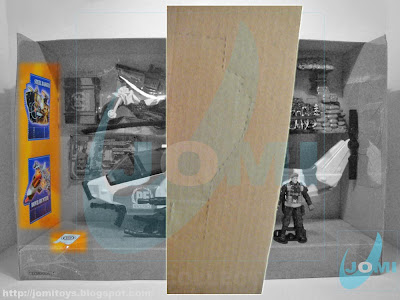 On a closing note, something interesting Chap Mei done with the boxes inserts. Also present in the Jungle Adventure line, at least. You can detach the other line models from the cardboard inserts (see colored sections of the picture). And it even comes with a small target for the troops to practice on.

Status: Unavailable
Posted by JoMi at 7.7.10