Another find during 2008 Xmas time, this police "armored van" seemed a little poor, yet I obviously set my mind to "get it". I thought it would be the worst of all new SWAT line. I couldn´t be more wrong. 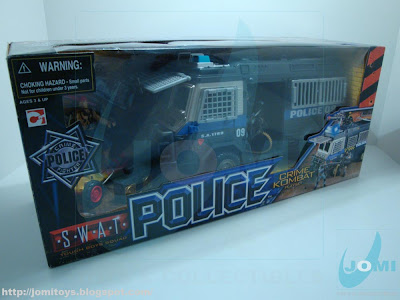 I don´t know if it´s the light gray bars, the display design, something just wasn´t as "cool" as the others. I firmly believe Chap Mei didn´t make this on purpose... but this was a surprise. A good one. 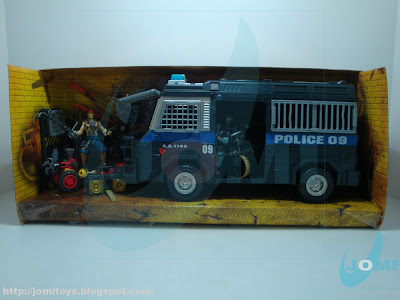 I´m still recovering from the disappointments inflicted by the crime fighter helicopter lack of cockpit details and the police humvee lack of doors. This was turning point of opinion towards this "good looking but not functional line". 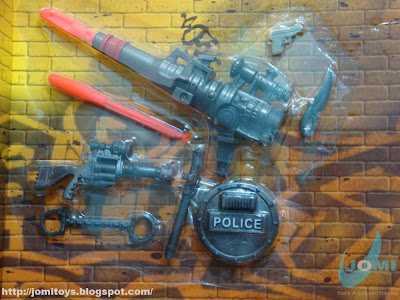 Accessories view. We´ll see the vehicle cannon, the knife (and gun) in the next pictures, but the rest we´ll leave since we´ve reviewed them already (refer to SWAT police Humvee). 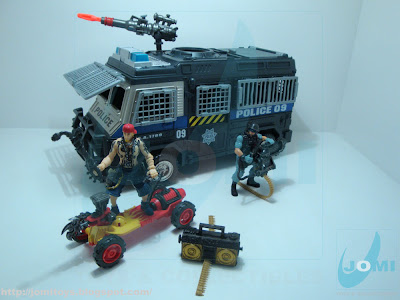 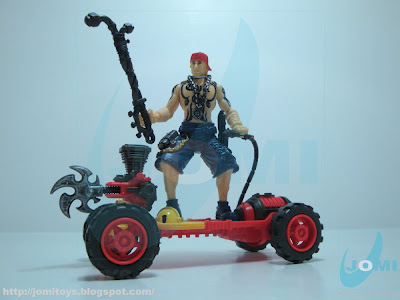 The "Swiftblade Bill" figure and his motorized board. 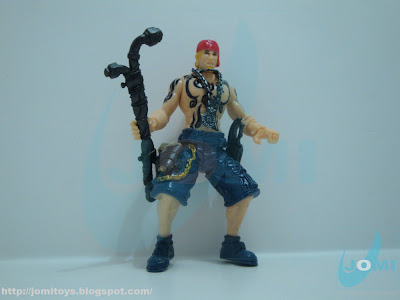 The guy had to be put against the wall, since his legs make an arch... John Wayne alike. But other than that, a great looking figure. The holsters kick ass. 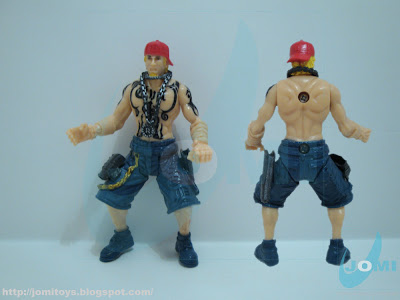 This figure has a lot of cool details, a great custom volunteer. 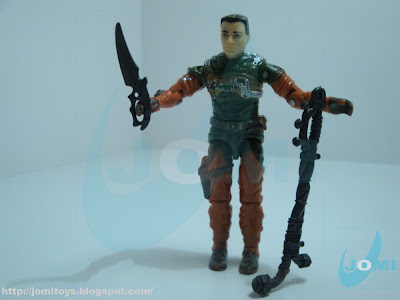 A scale picture of Bill´s weapons. The pipes aren´t of great use, but the knife looks like the one used by the Nigh Slasher in 1986´s "Cobra". 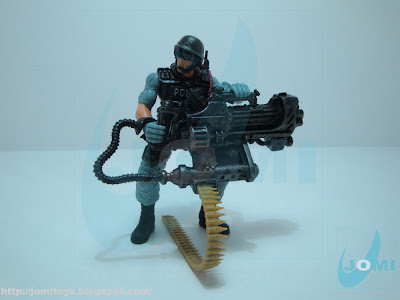 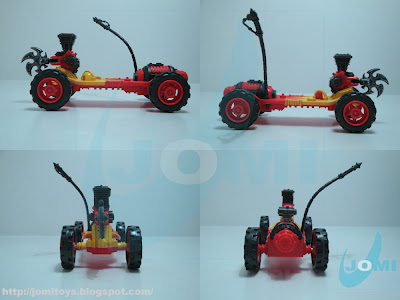 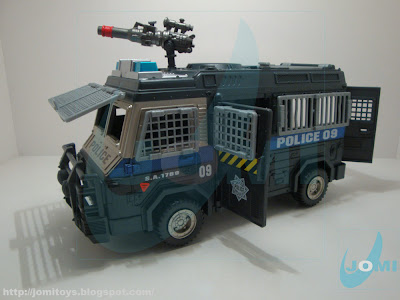 The expected moment... the truck, armored van, whatever you wanna call it... I can´t get enough of this vehicle. 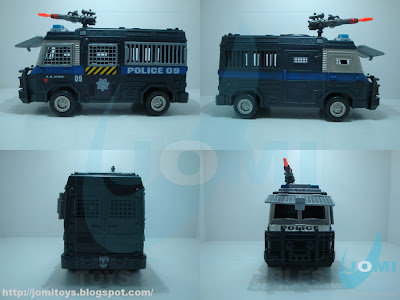 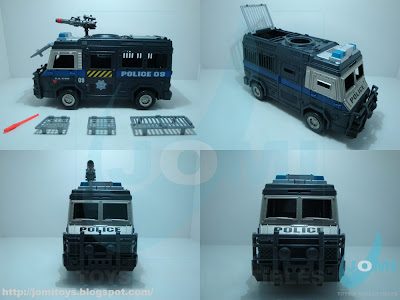 Cages detached, opened prisoner´s roof cage; front without cage and with and without cannon. 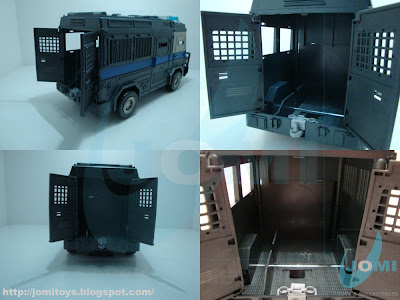 This was the main reason of my awe. The back doors... open! And the prisoner´s area is actually separated from the police figures it can carry. 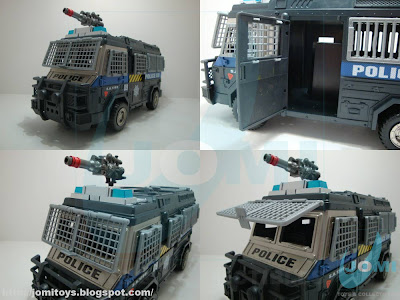 Some great details of this very credible "every-day" police vehicle. 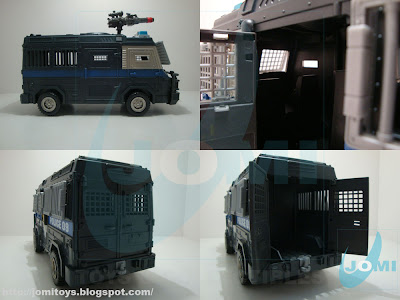 And another design bonus... the side door which opens to reveal the swat police compartment, is shared with the driver´s cabin. And yet another shot of the back. I still can´t believe it really opens! 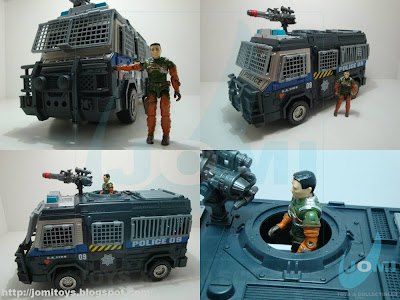 Scale shots. Feast your eyes on these... 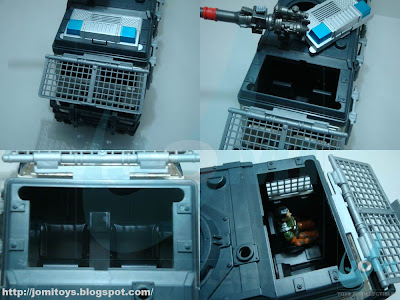 The roof comes off to set up your figures there. Simply great. Because I was getting a bit annoyed when trying to fit the RAH figure from the window. All hail my ignorance. This was a turning point in the sad story of SWAT police non functional vehicles. The roof comes off and you really gotta believe it, because it so well connected (and I don´t mean firm, but almost imperceptible). 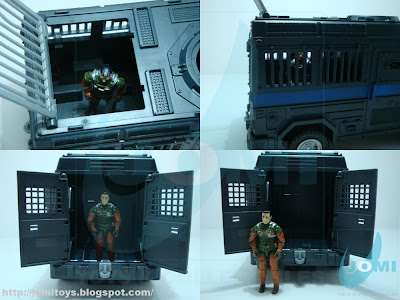 The prisoner´s block. Or if you want to customize it... turn it into a Spec Ops fast intervention/ deployment vehicle. And you got space for at least 4 guys fully equipped there. 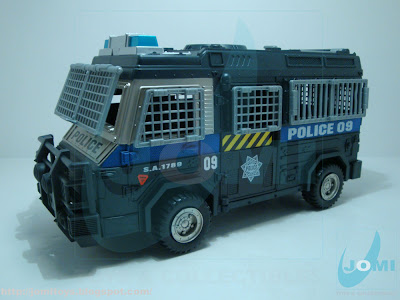 Another gem. Another must have for all you Chap Mei fans and 3 3/4" collectors out there.

Status: Available through Amazon.com
Posted by JoMi at 3.10.09