After Legends of Knights, Chap Mei came up with a new Medieval line (instead of keeping the previous name for the series). With brutal monsters like Kronox, Cyclops and Grasper, came a revisited castle. While the really big curtain wall version will hopefully land here soon, the next best thing is the entrance version... 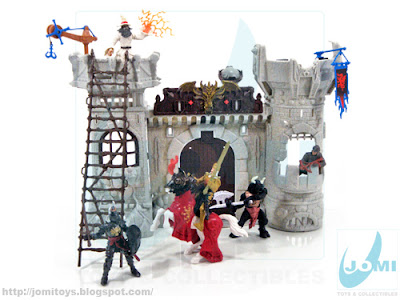 While the series name may have been changed, the sides remain the same, with the same kingdom colors: Dragons (now led by Lord Draco) and Lions (led by King Leo II). 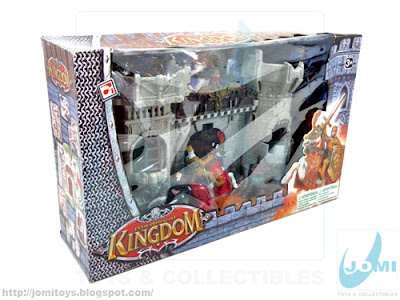 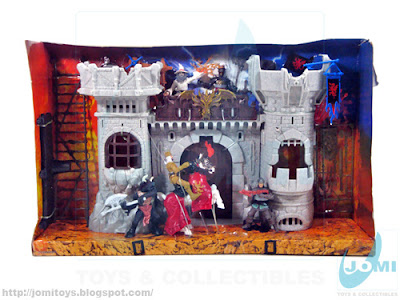 All new figures, horse and a newly coloured castle gate. Included parts for the castle (and the recent plastic tree concept of weapons rack). 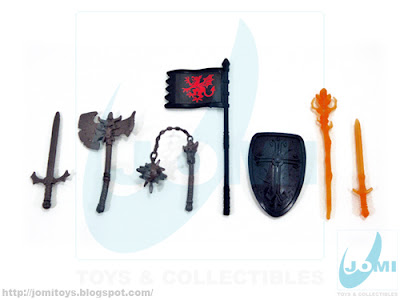 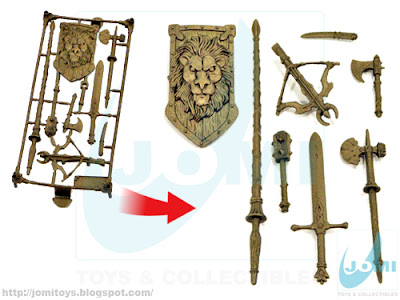 Just like in other recent CM lines, weapons come off and the rack can be kept for whatever purpose one may find. 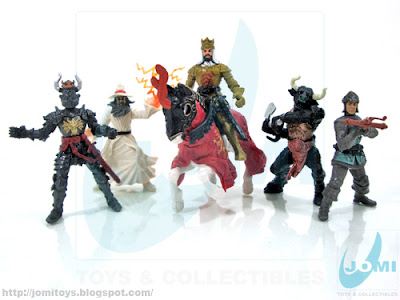 Included figures with this set. 1 King, 1 Lord, a magician, a monster and a crossbow soldier. 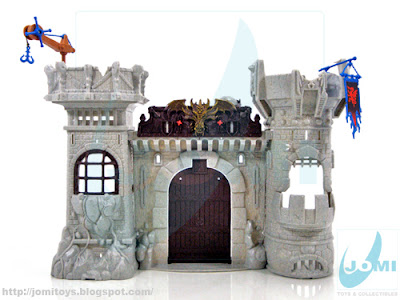 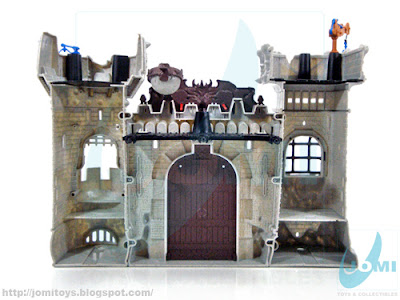 Castle entrance back. Not very impressive, but we must keep in mind it was developed to include side walls. And this is a whole different set. 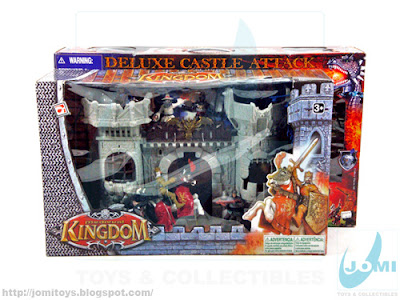 The best way I found to show this playset was to compare it to the Legends of Knights version, since it´s the base model for this Medieval Kingdom version. Starting with the box, this one is somewhat smaller. However, the previous one had a catapult included so the box was naturally bigger. 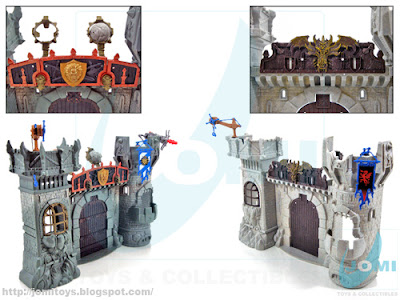 Left, King Leo´s castle from LOK, right Lord Draco´s castle from MK. Leo´s castle had an extra tower defense weapon and 1 extra catapult. The shield plaques could be "broken off" by catapulted stones. The MK version includes a dragon plaque (or coat of arms) that is firmly attached to the wall. 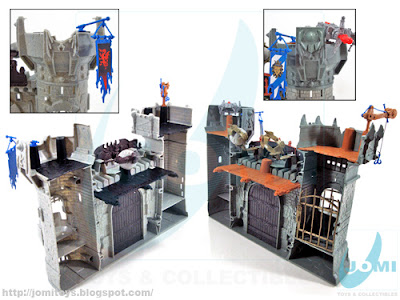 Right, King Leo´s castle. Again showing more detail as it includes a gate for holding prisioners inside its dungeon. Also, has a removable battlement piece which actually fits the most recent version of the castle. Naturally, since it´s the very same mold for THAT tower. Other differences, minor. Color mostly. 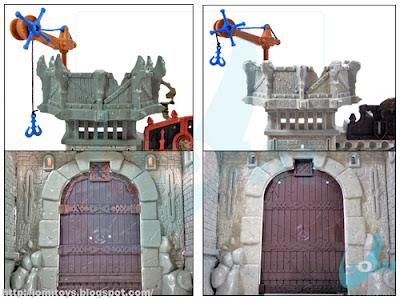 The winch tower shows a definite difference. The spiked looking crenellation is no more, looks melted or affected by erosion or battle. Cool-looking, actually. If you have both castles. Gate has minor differences, a couple of holes for defensive arrows and plain color. 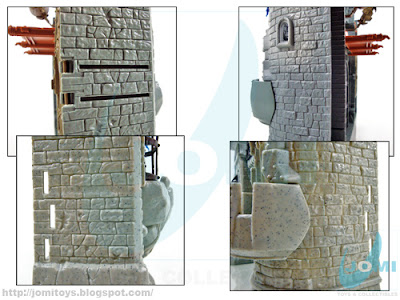 Bottom, MK castle (Draco´s). The connections for the side walls of the bigger version are visible. And here we can also (and better) see the color difference between the two. The cuts on King Leo´s wall are the dungeon gate´s connections. 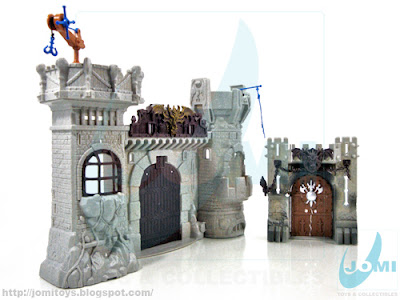 This castle seems to be inspired (at least in color and coat of arms) by the small excuse for a keep Knight Magnus had. Now led by a Lord, the "Dragons" had to see their home enhanced. 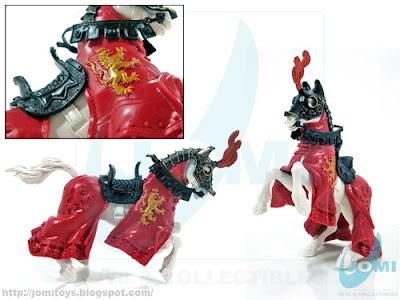 Included with this set came a new war horse. At least, with new saddle, armor and covers. Beautiful heavy-weight worthy of a King! 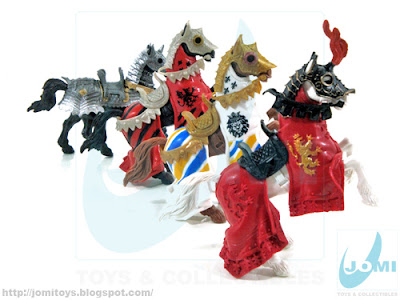 While the horse was the same used for the previous models in LOK, it´s really interesting to watch Chap Mei´s artistry on this one. 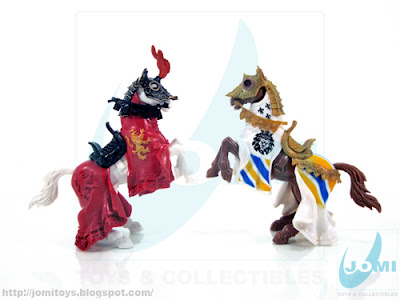 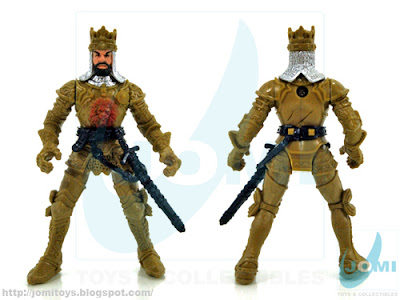 Figure: King Leo II. If this is a second version of LOK´s King Leo or if it´s a second King of its dinasty making this figure a whole new one, it´s uncertain to the best of my knowledge. 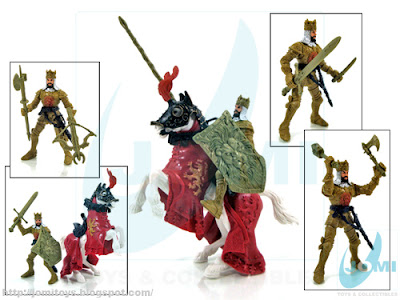 With a golden armor and golden weapons, riding a fierce heavy-weight to battle! 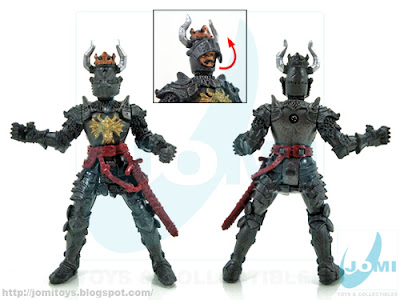 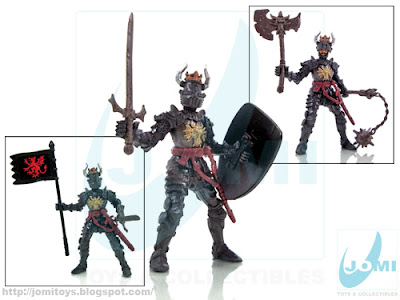 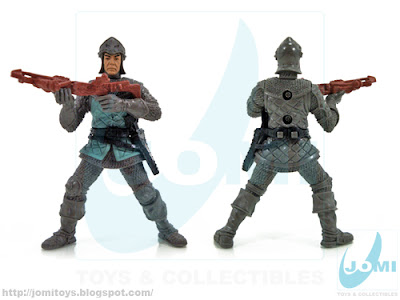 Figure: Crossbow soldier. May have a name, but the box doesn´t picture it. 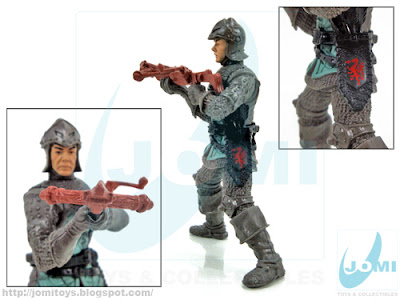 Moves its arms and waist can be rotated to point its quarrels to target. Also, a nice detail: the bolts quiver with the dragon coat of amrs. 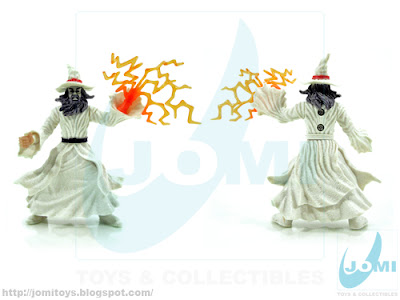 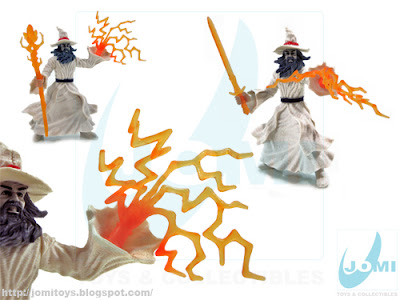 With a lightning bolt hand, also includes a transparent orange sword and staff. Neither of them are fluorescent... 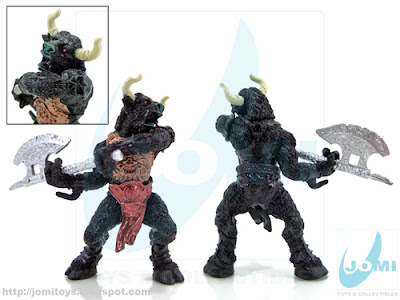 Figure: Minotaurus. Last but certainly not least, the included monster. Superior sculpting but minimal articulation (waist, shoulders and head). Axe comes off the right hand, but molded onto the left. Typical...